United Kingdom as a Country
United Kingdom comprises of England, Northern Ireland, Scotland and Wales with their respective capitals as London, Belfast, Edinburgh and Cardiff. These four countries together form the sovereign state of the United Kingdom of Great Britain. Britain was the world's first country to be industrilised and thus making it one of the largest economies in the world. The country is surrounded by the Atlantic Ocean, North Sea, English Channel and Irish Sea. It is a unitary state, which is governed by a constitutional monarchy and a parliamentary system with its capital in London. People in the UK are called British although they have different nationalities.

The first half of the 20th century saw its downfall in terms of military power in the two World Wars. The later half witnessed the disintegration of the Empire and rising of the UK into a modern and prosperous nation. Some of the popular cities are Birmingham, Glasgow, Leeds, Sheffield, Liverpool, Bradford, Manchester, Edinburgh, Bristol, Belfast.

Most of the country consists of lowland terrain and Thames, Severn and Humber, Tees, Tyne, Tweed, Avon, Exe and Mersey are the principal rivers. The UK has a temperate climate, with abundant rainfall throughout the year. The temperature keeps fluctuating in different seasons. Summers are warmest in the south-east of England and coolest in the north because of its proximity to the European mainland. Heavy snowfall occurs in winter and early spring on higher regions. 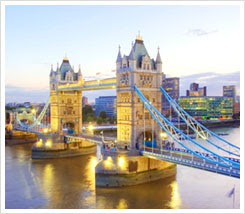 Why choose United Kingdom
If you wish to Study abroad then probably UK is the most appropriate destination for you. You would get an opportunity to experience the quality education in an exciting environment, which will give ample boost to your career and enhance your personality. UK's universities and colleges have attracted overseas students for long because of its high academic standards, world class infrastructure and facilities with a wide array of offerings.

UK quality standards are monitored by a strong and independent assessment system, so that students can be sure that their qualification is accepted worldwide. Throughout their study programs, the stress is laid on creative and independent thought process, which helps students to develop skills, which are needed to compete in the global market. There are scholarship, health care benefits and many other facilities for the international students from the UK government, which makes UK the first and largest choice of the international students. Read more >>> http://www.theworldkey.in/studyvisa.html
Posted by The World Key at 21:59

The World Key
The World Key Overseas Solution Pvt. Ltd. Immigration at 3B2 Mohali is the fastest growing immigration consultants having expertise of providing quality solutions in immigration services to individuals.